The Cost Of IT Security For Small Business 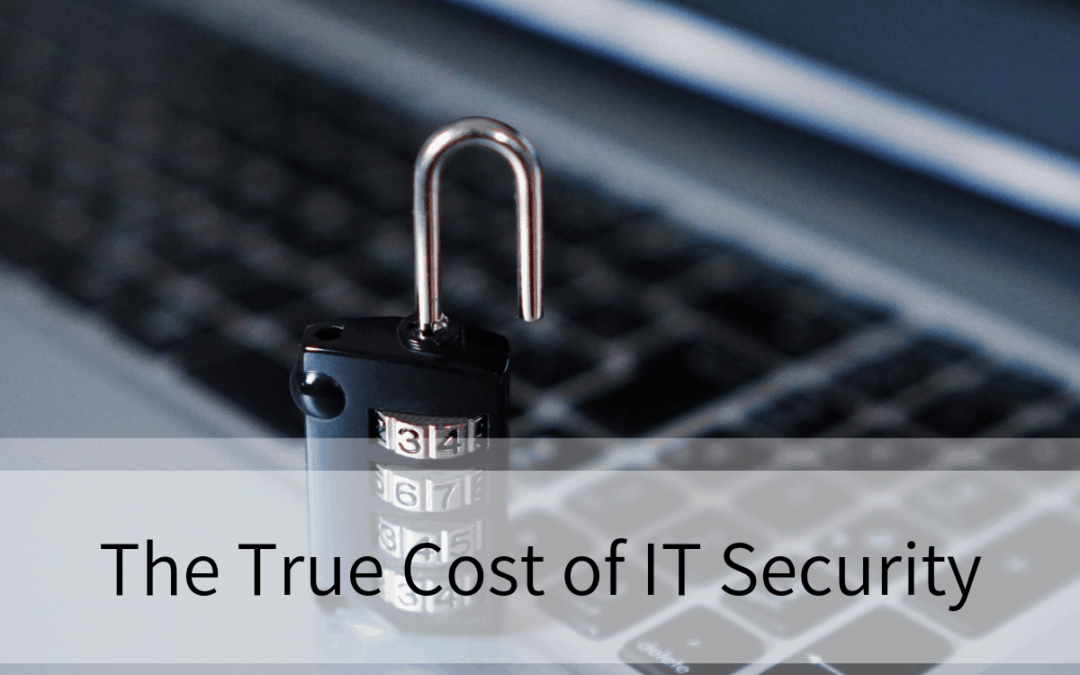 The Cost of IT Security For Small Business

Cyber attacks are becoming increasingly common. It’s no longer a matter of if you’ll be attacked but when. Although being hacked or having your data breached seems unlikely, far-fetched and in many cases borderline impossible for small businesses. It’s only a matter of time until it happens to your business.

The thinking many small businesses have – even those in tech – is why would anyone want to hack their system? They’re only a small business… Why would anyone think of getting a hold of their data? What do they possibly have to gain? And the last and most prevalent of them all is that having “extra” security is just a waste of money, which can be spent on other more important things. In today’s increasingly digital, litigious and vigilant society there’s nothing more important than cybersecurity.

Small Businesses Have More To Lose

While larger companies like Under Armour, Uber, even Walmart and Equinox (some of the major names who’ve been breached in recent years) have plenty to lose, smaller businesses can lose everything in one single attack. This causes them to be an especially enticing target for attackers who are looking to make a quick buck by holding them ransom. They’re far more likely to try to comply with a hackers demands and less likely to fight back.

Once you’re in the middle of an attack, most small businesses don’t have the capabilities to “escape” if you will. They’re either completely at the mercy of attackers, or they’ll continue working on their network never realizing that they’ve been breached. If it’s the latter (as is the case with malware) they’re exposing their own data and that of clients as well to hackers who’ll find the most lucrative way to make use of the data they’ve accessed.

Small Businesses Can Be An Unlikely Point of Entry

Many larger corporations have contracts with smaller businesses. That makes them a prime target for hackers and cybercriminals, who only need partial access to gain access to larger companies. In most cases, tracing the attack to its origin will lead many companies to their far smaller counterparts, whose services they’ve been using.

Small Businesses Are Less Likely To Be Vigilant

Most small businesses can’t afford their own IT division, so that’s simply left to is the most tech-savvy amongst the bunch. Or, worse still, using a one-size fits all approach and getting ready-made plug-and-play software for protection. They’re blissfully unaware of the significant threat being posed by their lack of oversight. That lack of vigilance, oversight, monitoring, and cybersecurity expertise make small businesses a paradise for any cyber criminal. Even if they don’t intend to sell off sensitive information – a small business can be a great candidate for extortion, and a way to obtain entry to more lucrative data.

Are You Vulnerable To An Attack?

Have you hired a reputable, local cybersecurity company to analyze your possible threats and then make recommendations? If not, you’re definitely vulnerable. Every 39 seconds there are attacks and most of them (43%) target small businesses. Some of the most common attacks include:

Data breaches are by the far the most common cyber “attack. All attacks start out as a data breach, but where this sort of attack differs is that it focuses on exploiting vulnerabilities in your current software and systems to gain access to your business’s data. Once there, hackers can remain in the background forever really, or until they feel the need to strike. From here they’ve got the greatest vantage – undetected they can leak, sell, monitor and exploit your businesses data in a manner that is most beneficial to them.

As the name implies, ransomware, in a nutshell, would be hackers exploiting your system’s vulnerabilities to “kidnap” your data and then release it back to you for a fee – usually digital currency (bitcoin). Ransomware is far easier to catch than a data breach. Simply because the hackers are making their way to you – they want you to know that they’ve accessed your data. Unfortunately, this attack can be more devastating to businesses as they scramble to put together the money to release their data. While this is happening their business is practically at a standstill – which is more money wasted.

DDoS attacks are primarily aimed at non-remote businesses. Businesses who rely on web-based systems and servers to carry out business. Usually, the culprits will target your websites or other networked resources. These are generally malicious attacks that aren’t meant to benefit the attacker financially but could simply be a retaliation type of attack. Since it’s relatively easy to complete. All attackers need is access to plenty of bot traffic that would overload the servers.

As Wyoming’s information security and cybersecurity specialists we’ve partnered with some of the leading names in innovation to make our clients safer – protect their data. At the end of the day, the cost of a lack of data security is far greater than any small business can afford.

Contact us today for a detailed audit so we can get your business to be safer and free from threat – in real time. It’s one of the best decisions you can make as a small business.